Swallows and Amazons - the movie? 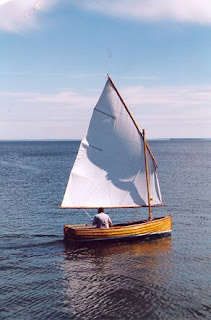 It was with enormous pleasure that I read, some months ago now, the news that BBC Films were going to make a new big-screen version of Swallows and Amazons and that they were busy securing the rights to the other books. The thought that, following Lord of the Rings, Narnia and Harry Potter, the Swallows and the Amazons would be the big new movie franchise filled me with excitement and anticipation. I'm not a great fan of J.K. Rowling or C.S. Lewis (though I've enjoyed reading most of their books and watching the films) but I am a Tolkien geek and, as such, enjoyed the build-up to the release of Peter Jackson's movies almost as much as the films themselves (and I'm already getting excited about the Hobbit!) The internet was full of 'Lord of the Rings Movie - rumours and gossip' websites. People with strange online pseudonyms like 'Eowyn' and 'Durin' quarrelled wonderfully about whether Bob Hoskins would make a good Bilbo Baggins, whether Tom Bombadil would play any part (and who was he?), whether Sam would be a girl, and whether the Balrog should have wings! 'Ringer Spies' fed back information about locations, cast members, possible plot alterations, etc, etc.


Now it's not surprising that there should be rather more of a geeky, online Tolkien community than we have for Arthur Ransome. But we can be pretty darn geeky when we want to be. Don't get us started on mousing sisterhooks, or the plumbing in Beckfoot. But we have been surprisingly quiet about the proposed films. And no new news has been emerging from BBC Films.

Do we know if principle photography has started?


Have we any casting news (of course we're unlikely to know the stars, but it is quite likely that Mother, Captain Flint and other adult characters will be well-known cameos)?


Do we know or can we guess anything about locations? Some present themselves very easily, others are more problematic. Even 'Rio' is harder than it was for the 1970s film-makers. The concrete cafe/nightclub will be hard to make disappear.


Will they use special effects? Think of the Lord of the Rings - the landscapes are incredibly real - and that's because they ARE real locations - but ingenious use of modern technology created synthesis landscapes, with grasslands from one part of New Zealand, mountains from another, and misnamed, enormous 'miniatures' located entirely convincingly in the heart of these landscapes. Does this provide the film-maker with the opportunity to recreate Ransome's Lake in the North in a way that none of the lakes quite offer? Friar's Crag could jut out from the east shore of Windermere, which itself could have the Old Man at its head, etc, etc. Or would this be pushing the budget too far?


Do any TARs (Arthur Ransome Society members) know if approaches have been made to use any of the original boats? After all, classic lugsail dingheys are not two-a-penny. Will the Esperance be the Houseboat?

Really when you think about it, there's more than enough to speculate wildly about. So I do wonder - why aren't we!? Please feel free to use the comments facility here to do so to your heart's content!!
Posted by Duncan Hall at 21:02

I just stumbled across your blog. I hadn't heard about the efforts to make an S&A movie, although I live in America and am pretty disconnected from the British film scene.

I looked at my first source of movie production details -- imdb.com -- for answers to some of yours questions, but came up empty-handed. All I can tell you is that it's scheduled for a 2010 release; I can't see any details of the production without "IMDbPro" membership. It might be worth it to keep checking the posting for the movie there, although I'm not sure how quickly it gets updated when new news comes out. <:-/

Still....fascinating! I think I'll be checking back with your blog to see if any news pops up. : )

Please do! There was an article about it in the Yorkshire Post a week or so ago, so there is a bit of movement on this now.

I can't wait for the film! haven't heard anything in the press since the initial announcement last April or so. I look forward to hearing about any updates - quite agree that it would be a shame to use anything other than the classic dinghies.

Me and my boys (13 &10) have all enjoyed the 1974 S&A movie, and we have 'S&A Forever' on order (why kids these days don't want to read the originals, well that's another whole discussion - at least they like the stories :-).

I'm looking forward to the new movie, but I really hope it captures the flavour and the innocence of the era as well as the originals.

Great read thanks Duncan,
I hope you will do some more stuff on AR Wiki. 'Great Northern?" is a good title for the blog by the way, "is it or isn't it?" Peter (Nankai)

I'm quite excited for this movie as well, Duncan! As a lifelong reader of Swallows and Amazons I can only hope that the film makers will remain true to the book, especially the time period it's set in. The last thing I'd want to see is the company getting fed up with trying to make a modern tourist attraction look like 1931 and decide to make the movie take place in 2010 instead.... that would be horrible, as I'm sure fellow purists would agree.
I've done a little bit of snooping on the web, the most significant piece of this involved signing up for a 'free trial' of IMDb pro (which I intend to cancel before payment is due) solely to view the swallows and amazons page. It didn't tell me much... only that it is still in development and that the writer of the screenplay will be Andrea Gibb; Nick Barton and Suzanne Mackie the producers. there is no poster. It did however reveal that harbour pictures is involved in the film making as well as BBC Films (which consequently yielded a fruitless search)and gave an email address: info@harbourpictures.com. I intend to email right away. 2010 will not come soon enough for Swallow to sail again!

Hi - even better thsn sll thst is a film on More 4 this saturday called Swallows & Amazons: Bristol Old Vic Sets Sail. Check it out. I think seventh-art.com has more info.

Just rereading the whole lot - Pidgeon Post was a lot better than I'd remembered (didn't approve of the lack of sailing as a kid and only read it 8 times out of protest).

I've yet to read another author who can make characters live quite as well as Arthur Ransom does, and not just the kids.

If they make a movie or two I do hope they manage to capture the spirit of the books. And don't make me fall in love with Nancy, Peggy, and Titty all over again!

The Lord of the Rings films were, in my opinion, absolutely dreadful. I felt they completely missed the point, and sold out for purely commercial gain. Half a star from me because they even put me off the books, which I have not touched since watching the films (after a quick WTF? skim). Ruined, I say!

I think that the reason we aren't spreading rumours, is that there is practically no info from the film crew doing it.

Oh gosh, this is so cool!

Casting is currently underway! It would be very interesting to hear from anybody who went along to a casting session (unless you had to sign confidentiality agreements!) Did you see some script? What did they ask?