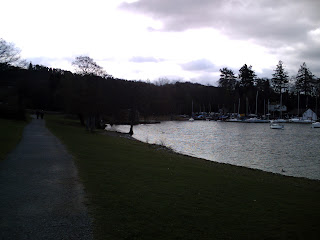 I've just returned from a day in the southern Lakes, and about as Ransome-y day as I've spent in a long time! During the day I've tried to investigate some of the theories I suggested in an earlier post (the one advocating a geographical approach to locations); I've explored High Topps and I've been to the marvellous Kirkland Books in Kendal. 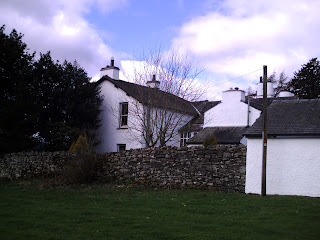 I arrived at Windermere quite early and drove straight to the car-park near Ferry Nab. A short walk around 'Holly Howe Bay' brought me to the stone jetty and little boat-house at the Old Rectory. While Ferry Nab itself makes a poor Darien, deviating slightly from a geographical approach, Cockshott Point is much better. It offers a fine view down the lake to Ramp Holme. 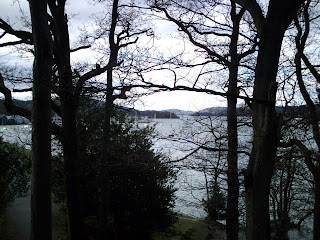 Back in the car, round the north of the lake, and down to a small car park near Wray Bay. I got out of the car and walked along the lakeside road towards Belle Grange. No amount of imagination-stretching could turn Belle Grange Beck into the River Amazon, but in other respects Belle Grange was remarkably Beckfooty. 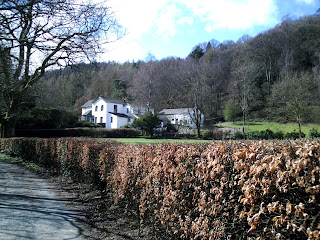 It has a high, rocky promontory. The path up into the woods from Belle Grange is paved as it was once a road. I've been up there before and had no intention of going this time, but I had such an overwhelming feeling of Picts and Martyrs that I went up, despite myself, in search of a Dog's Home I knew was not there!

Back to the car and then down to a small car park by Ferry House. Not a long walk here, just back to the lake again, to see Ramp Holme from another angle. There were lots of people sailing Mirrors around the island. Puddingfaces. 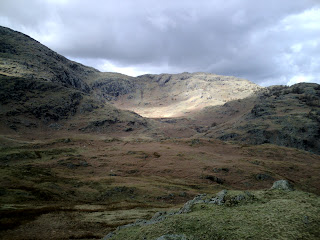 To stave off jealousy I was off, and this time to Coniston. There was a road race and it was problematic trying not to run them over and trying not to crash at the same time, so I headed up into what some Ransome location seekers have considered Pigeon Post country. I ended up at Tilberthwaite and walked up to "High Topps". Well it's a whacking big place! There are other potential High Topps around, but this one is very good. I may even have found the golden gulch! The weather was closing in at this point and I feared it may soon become less like High Topps and more like High Greenland. 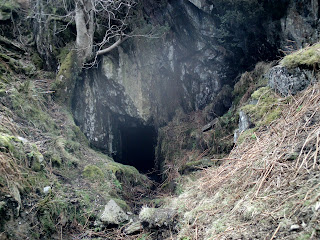 I didn't have a sensible mate or friendly native to tell me to stick to paths or be properly equipped: this area (up on Yewdale Fell) is a great place to explore; it's an access area and you could comb it for the gulch if you wanted; but it is quite dangerous: there are shafts, old workings, levels and quarries all over it, and (in late winter rather than in the middle of a hot, dry summer) there are boggy areas too. It's best to be properly equipped and to take a map. And I say that to myself rather!

All was well however; I had no ginger beer unfortunately, but I drove to Ambleside and had a hot chocolate instead. I also decided I had to get on the water. All I had time for was the 40 minute cruise, but it did afford me some very good views of the northern reaches of the lake. I watched out for an alternative Beckfoot. Huyton Hill is VERY big. It doesn't really look right, although Pull Wyke makes a very good mouth of the River Amazon. There were a few other Beckfoot Promontory options, but Belle Grange had one of the better ones up there! 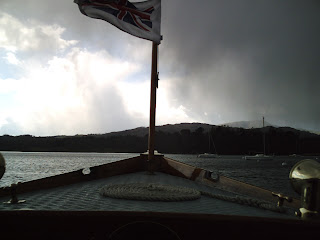 Finally (after a quick look for the site of the North Pole - though I have another North Pole theory) I drove to Kirkland Books at Kendal. I made two modest purchases (Thorstein of the Mere, and an early edition of Peter Duck) amidst all that temptation! Then home.

I think I will theorise a little before I finish entirely (please comment and disagree with me, etc!)

It occurred to me that the lake changes a little between books. There are periodic Conistonisations or de-windermerifications! Swallows and Amazons, Winter Holiday and (perhaps controversially!) Picts and the Martyrs are, to me, very Windermere-based books, while Swallowdale and Pigeon Post are much more Coniston-based. To the extent that the geography even changes slightly. In Swallows and Amazons the foot of the lake is a long way south of the island (consistent with the island location being that of Ramp Holme). The Antarctic is a great unexplored area, despite trips south of the island on more than one occasion. In Swallowdale, the island (and particularly Horseshoe Cove) is much closer to the foot of the lake - they can hear the houndtrail reaching the foot of the lake from Swallowdale. In Swallows and Amazons, the northern end of the lake has High Hills and Mountains of a general sort, but it is in Swallowdale that one principle peak emerges: Kanchenjunga. In Winter Holiday it is a short walk from Holly Howe to Bowness Bay, whereas at other times this is not necessarily suggested.

I do have a theory for why this might be, based largely on a question of the principle motivation for each story. I shall return to that theme at another time!

There are loads of photos from the today that I've not posted here. I'll pop them up at the Tarboard Yahoo group site.