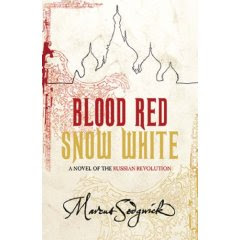 I bought the book a while ago and it was sitting on my bedside cabinet unread. I have to confess that I was reluctant to read it, as I, at one time, had plans to write a book not entirely different, and still have a screenplay based on the same period of Arthur Ransome's life languishing on the hard-drive of my lap-top. But I took the beautifully-presented volume on holiday with me, and read it in a few sittings. I have to say that it is certainly very readable.
The book is written in two quite distinct styles, though both voices belong to Ransome. Until the Revolution, the story is told like one of Old Peter's Russian Tales (Old Peter, Vanya and Maroosia are borrowed to help this along). After war and Revolution, just as Ransome's style changed, so the voice of Ransome here changes. It becomes quite a straight, first-person narrative.
I suppose this is where the first of my reservations about the book surfaces. Ransome's Autobiography focuses on this period of his life and is there for anyone to read. To re-write the story, still from Ransome's perspective, is brave. And to change the story, here and there, braver still.
Marcus Sedgwick defends himself here, with a clear statement that the book is a work of fiction and, while it is based on true events, he makes no bones about using his imagination here and there. Furthermore, it was inevitable that he would have to do something about the secret service files that were released in the last few years, raising that old question of whether Ransome was some sort of spy. He publishes extracts from the files at the back of the book.
Sedgwick decides to go with the idea that Ransome was, for a while at least, an SIS agent: S76. It is a valid interpretation of the archives (though I think it is an incorrect one) but it is hard to then take the rest of the story at face value. If Ransome were an SIS agent, then his arrest, his difficulties at the Foreign Office, his problems in returning to Russia all become very problematic. While it isn't entirely surprising that there was a lack of joined-up government in those days, at the very least he would have had a clear contact in the Foreign Office.
So Sedgwick uses his imagination a little to suggest Ransome accepted an offer that was made (to join SIS) - an offer Ransome wrote about himself, but dismissed as absurd. But following that, he chose to accept Ransome's account of events.
That said, there were rather basic biographical details that were played with a little, with less impact on the plot. Here Ransome was born in the Lakes rather than Leeds, and it was in the lake country that Kropotkin taught him to skate, rather than a Headingley garden pond.
More central to the plot, Ransome is brought into some parts of the life of Robert Bruce Lockhart, not entirely unreasonably, but without an empirical or historical basis. Ransome never wrote about Rasputin (despite him being like something from one of his darker Russian tales) but is here present at his arrest. Ransome played no part in 'the Lockhart Plot' but here his near-involvement is a plot hook for much of this book.
In a work of fiction, none of this really matters - but it is surprising that some of Ransome's real adventures and events of very real interest are minimised. For the most part Ransome's closeness to the Bolsheviks is played down (the only reference to Ransome performing some small services for Trotsky come in the postscript, there's little about Ransome's odd time in a Bolshevik commune eating nothing but cheese, the pro-Bolshevik writings he produced at the time are not considered). At the same time, his small services for the British side are, if anything, played up.
There is something of a simplification of the politics of revolutionary Russia, although there are some very effective passages. One reason for the simplification would appear to be that the book is aimed at a young audience, although it's not entirely clear who that audience is. There are some quite adult references and themes at times.
In conclusion, I strongly recommend the book, particularly to Ransome enthusiasts but others too. But I also recommend caution! Have a read of Ted Alexander's Ransome in Russia, Ransome's own Autobiography and Hugh Brogan's Biography to get more of the detail and the complexities.