Swallows locations: the case for a geographical approach 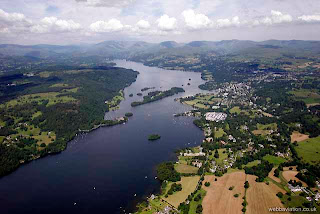 It is now generally accepted by Ransome enthusiasts that 'the lake in the north' is a composite lake, taking features of Windermere, Coniston and, quite possibly, Derwent Water as well. The photograph on the left shows some of the more obvious Windermere features: Belle Isle as 'Long Island', Bowness as Rio, the other 'islands off Rio', etc. As a child I took these obvious starting points and started making a search for other locations based on careful comparison of OS maps and Ransome's maps. It led me to find some locations that others have concluded through different methods, but also led to some other, more unusual, suggestions. 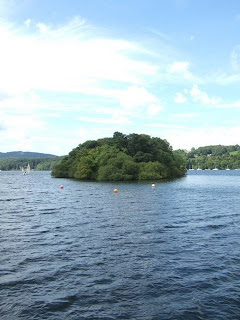 My early conclusion that Ramp Holme was Wild Cat Island seemed so obvious, when arriving at the decision through the comparison of maps, that it surprised me when, later, 'Captain Flint's Trunk' and other books did not consider the possibility. An OS Lake District guide did suggest Ramp Holme and Peel Island (on Coniston) as the two originals; others (including Ransome himself) pointed to Blake Holme (at the southern end of Windermere). Some of Ransome's maps suggest that the island is towards the southern end of the lake (as both Peel Island and Blake Holme are) but, in Swallows and Amazons, the Antartic is a great unexplored area, and the steamers could just be made out in the far distance at the bottom of the lake. The photograph on the left looks surprsingly similar to Ransome's sketch of 'Wild Cat Island from the South' (included in the author-illustrated editions of Swallowdale) and the buoys in the foreground mark where 'the rocks go out so far'. 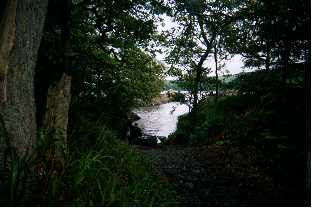 I once sailed to Ramp Holme, landed there and explored it. It has a beautiful landing place, close to a perfect camp. Behind the camp the ground rises to the pine (which can just be seen peeking above the other trees in the picture above) - but there the similarities end. It is not rocky or high enough, and there is no secret harbour. Those features are so clearly those of Peel Island, and Peel Island was so obviously an important part of Ransome's childhood and adulthood, that no argument could be made to suggest that the whole of Wild Cat Island can be found on Ramp Holme. Nobody looking at the secret harbour on Peel Island could be left in any doubt that it was the one Ransome had in mind.

Obviously once you accept some composites, it has the potential to undermine the 'geographical accuracy' approach. But not necessarily: it may indeed explain why, not only do hills and island appear to have moved around to make Ransome's world, they also appear to have changed form: like the island they are not one place but several, and that can be as true for houses, views and people as it can for islands. And perhaps, if 'a part' of the island is where it seems to be on the map, perhaps 'parts' of the other places are too.

Take Stephen Spurrier's original map of the lake, and compare with a contemporary Ordnance Survey map: 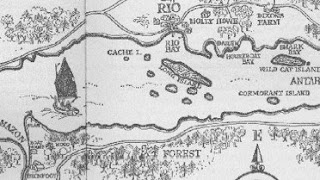 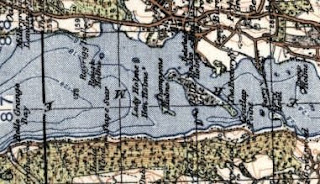 The two maps are remarkably similar. Clearly Rio and and Long Island are very recognisable. The geographical logic of the Ramp Holme location is also fairly inescapable. Is there a house in the right place for Holly Howe? Yes. There's the old Rectory. It's not Holly Howe. Certainly not on its own. We know about Bank Ground Farm and can compare photographs of it with the illustrations. It is not just its familiarity from the film; it is Holly Howe; it's where the Altounyans stayed the summer before Swallows was written. But you can see this 'other Holly Howe' - the Old Rectory - on this old photograph (taken from Ferry Nab - a most un-Darien-like Darien) and it is not a huge stretch to see it as Holly Howe as well. 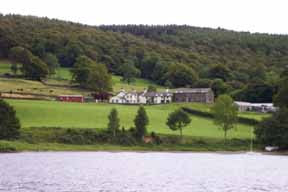 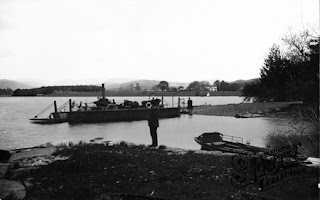 The field isn't steep enough, but it has much more of a bay than Bank Ground Farm. There is a perfect stone boathouse and jetty. From the rocky Cockshott Point, along a short path from the house, there is a tantilising view of Ramp Holme down the lake.

Also looking at the maps, my childhood-suggested-Beckfoot - Belle Grange - seems to be in around the right place. There are so many suggested Beckfoots, and I have no knowledge of a Ransome connection to the house. But it is certainly worth considering. 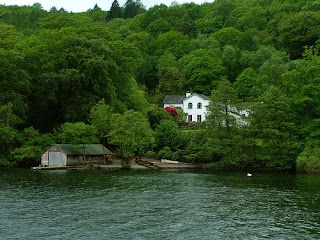 I shall return to Belle Grange for a future article. I shall leave this one here for now - but there is more to follow! Please comment widely!

I never thought Beckfoot would be so tree-filled. What about the lawns (which must have been fairly expansive for camping on as in Pigeon Post) and the visible flag pole?

Wasn't there also a weeping willow right on the edge of the lawns on the bank of the river as well?

Having said that, it is a long time since I have been to the Lakes and explored possible sites.

It's one of the best possible Beckfoots around Windermere - there are some good Coniston possibilities too.

I was there again today and there are lawns, etc. And there's a promontory where a flagpole may have gone. But it's not perfectly Beckfooty!